Tuesday’s trip to Lansing was eerily familiar, even though I had never been to Michigan’s state capitol. I stood on the Capitol lawn, bundled up in my heavy winter coat, with feet warmers in my boots. I carried signs and chanted “union busting is disgusting.” I listened to impassioned speakers, who were voicing the concerns of the thousands of people who gathered there, regarding the impact Right to Work for Less would have on their wages and working conditions. 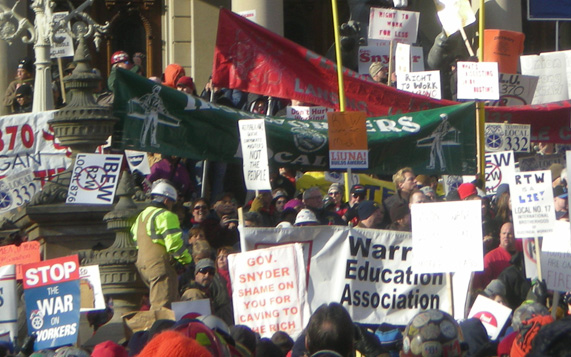 It was scary how Tuesday’s scene took me back to Columbus in early 2011, when we were shut out of the capitol building, and Senate Bill 5 was rammed through the legislature, despite the tearful, sincere and impassioned pleas of hard-working, middle class Ohioans.

As I drove home with my friend/labor consultant, Susan, I realized that we are not out of the woods in Ohio. Ohio’s current legislature already tried to silence workers through SB5, which makes it clear that part of their agenda includes breaking unions. Governor Kasich says he’s not interested in Right to Work, but that’s what Governor Snyder said too. A group, “Ohioans for Workplace Freedom” has circulated petitions to put “Right to Work” on the ballot in Ohio this November.

If “Right to Work” is enacted in Ohio, the profession that I love will be changed forever.

“Right to Work” is the most deceptive name possible for legislation that takes away the rights and benefits of employees. It’s like passing legislation that would allow school cafeterias to serve dog food, and calling it “Right to Eat.”

“Right to Work” sounds innocuous and sensible, but it is the farthest thing from that. If “Right to Work” was a product on a grocery shelf, and it was sold with the message that its supporters use, it would have to be pulled for false advertising. Saying that the amendment would give Ohioans “…a choice in whether or not they join a labor union and pay dues or fees at their place of work as a condition of employment,” grossly understates the impact and consequences of this type of legislation.

Proponents of “right to work” claim it merely allows for free choice of employment, “to just and favorable conditions of work and to protection against unemployment” (Universal Declaration of Human Rights). Ironically, that’s what unions do; promote the right to work under fair conditions, without the threat of retaliation, like getting fired for standing up for yourself and your colleagues.

Workers already have the choice to join the union or not. It’s called “Fair Share.” Fair share is exactly what it sounds like. If you don’t want to join the union, but would like to reap the benefits of union negotiations of wages and benefits, you can pay a reduced rate, called. That’s fair, and that’s “Fair Share.”

“Right to Work Around the Union,” as Jon Stewart calls it, has so many ramifications beyond joining or not joining the union. Just put it next to Senate Bill 5, something that Ohioans are familiar with, to understand the huge implications. If SB5 and Right to Work were dogs, SB5 would the neighbor’s annoying poodle that barks in the middle of the night and wakes you up. Right to Work is a pit bull. Senate Bill 5 is “Right to Work Lite.” Although the provisions of the two pieces of legislation use different wording and different restrictions, they both serve to weaken unions and the ability for workers to collectively bargain.

By the way, Senate Bill 5 was defeated by a margin of 61% to 39%. Many who voted against it said they did so because the legislation was “too far reaching.” Right to Work reaches even farther, so, it would seem Right to Work is something that Ohioans wouldn’t want and would defeat even more soundly than SB5. However, in a February Quinnipiac poll, Ohio voters said they supported Right to Work Laws by a margin of 54 to 40 percent. This shows me that it’s going to take a great deal of effort to educate Ohioans about all that is wrong about Right to Work.

Thankfully, I have never worked in a “Right to Work” state, but I know many teachers who have worked in public schools there, and none of them have anything positive to say about their experiences. They have explained that, although they can join unions, in states like Florida and Texas, the unions have little clout. Local school districts do not have to negotiate with teachers. They can simply implement board policy. The due process, which insures teachers will not arbitrarily lose their jobs, is not guaranteed. Teachers don’t protest unfair working conditions, for fear they will lose their jobs. There are no strikes, because half the teachers aren’t in the union, so organizing is difficult.

When people call the legislation “Right to Work for Less,” it’s not just a play on words. At charter schools in Ohio, which operate without teacher unions and collective bargaining, teachers make $16,000 less, on average, than their public school counterparts. My friend’s husband, who teaches at a public school in Florida, makes $20,000 a year less than he would in my school district with the same education and experience level.

The teacher in Florida I mentioned is planning to leave the classroom this year, after 10 years of teaching, because he doesn’t enjoy what he is doing and the conditions under which he works. It’s not hard to imagine many teachers in Ohio doing the same thing, should we become a RTW state. The teachers and their students lose out on the wealth of knowledge these veterans could bring to the classroom.

With 2013 on the horizon, I’m thinking about my hopes for the new year. Chief among them is my hope that the attacks on middle class, working families ends, and that harmful legislation, like Right to Work, is not implemented in Ohio.